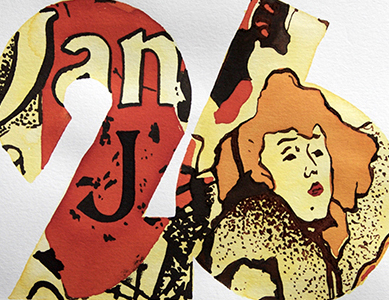 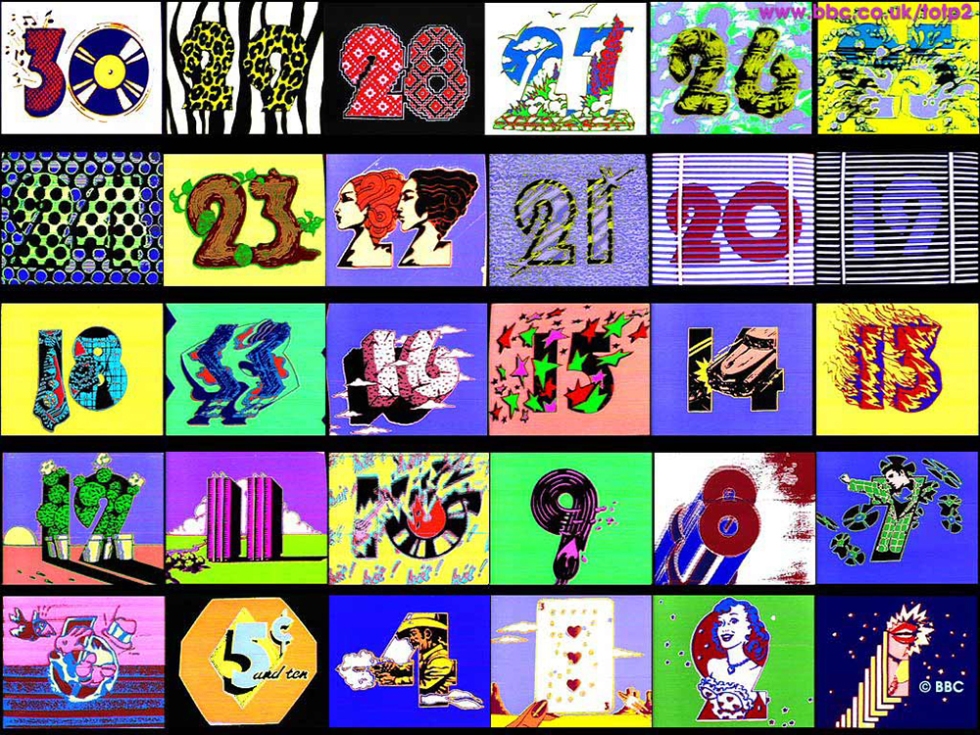 This is my first and probably last Inktober. A thirty one one day challenge to produce a piece of ink art for every day of October. And if you search social media for #inktober #inktober2017 thousands and thousands of images will appear. It’s an excellent concept and popular too. I saw this an ideal opportunity to showcase a diverse range of lettering and illustration styles all visualised with nothing but fountain pen inks, bleach and the odd little extra! First off, I needed a concept to hang the whole thing together. Back in the early 1970s Top of the Pops (UK) was the must see pop program. The intro consisted of a psychedelic countdown of illustrated stills to a jazzed up version of the Led Zeppelin classic ‘Whole Lotta Love’. See above.

So, using this ‘Countdown’ idea I’m simply pulling together a range of visual subjects and styles that have been of influence to me on my art journey and showcasing them inside, and breaking out of, the thirty one numbers all of which are based around the typeface Blippa. 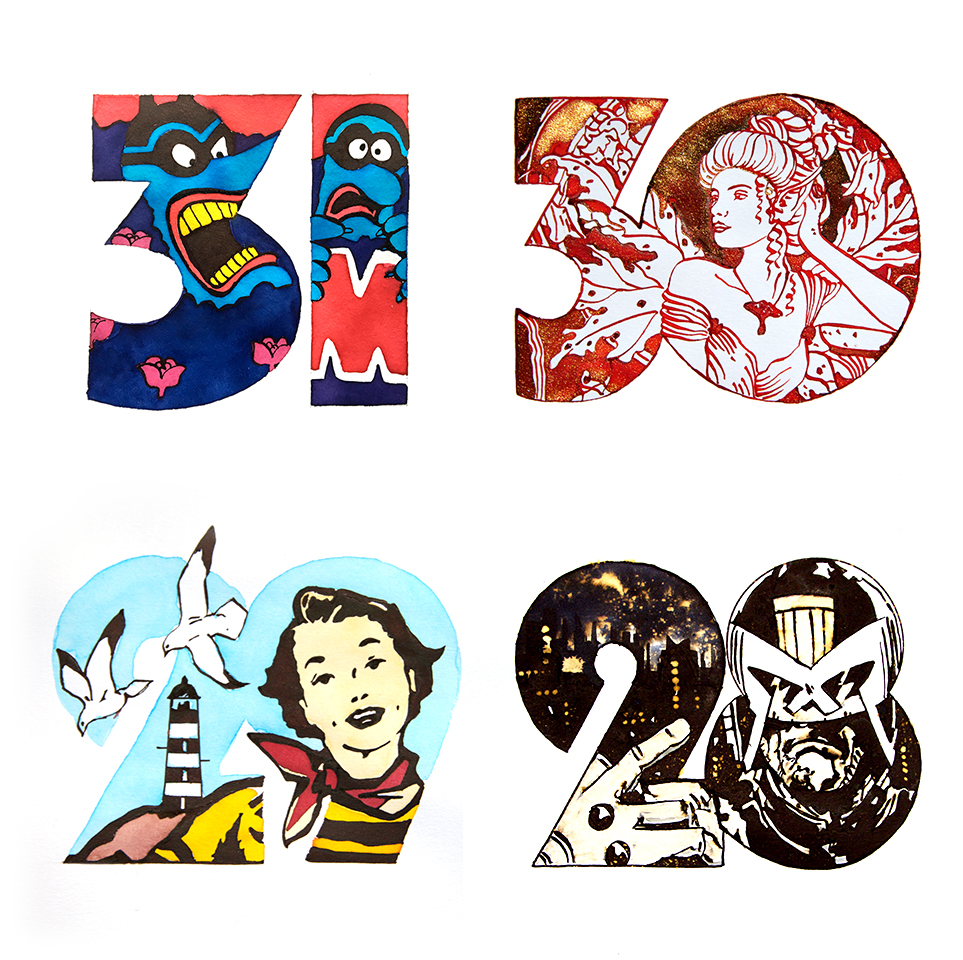 31. Blue Meanies – Yellow Submarine was the first animation that really hooked me. The fabulous colourful artwork by Heinz Edelman and Milton Glaser is a constant source of inspiration. Using my own four CMYK fountain pen inks I mixed the the colours and applied with a rigger brush and dip pen using a zebra G flex nib which I have used in all the examples.

3o. Art Nouveau – This is recurring them for me. I first got into the genre during my teenage years while staring glassy eyed at art posters and album sleeves by Kelly and Mouse, Roger Dean, Hipgnosis etc – a lot of their art was inspired from this source. The image I’ve pastiched is very much Alfons Mucha in style. Diamine have recently sent me their next batch of shimmer inks to play with so I thought it would be fun to try out Firefly with Wine Divine.

29. Heim und Hafen – I didn’t fully appreciate this retro style until I worked in London at some of the bigger storyboarding studios. Pale Blue and Buttercup yellow were the standard frame background colours with confident line work drawn in brush pen. The image came from some chocolate packaging. I used some of Robert Oster Signature range here – they make excellent colour washes and dry flat. For the line work I used Dark Chocolate. I was amazed at the visual similarity to Magic Markers I achieved. It was good to break the type outline with the seagulls – adds a greater design dynamic.

28. Judge Dredd – 2000 AD was just a great comic. Scifi, violence and great art – super blended with punk rock and new wave music – what more could a teenager with creative ambition desire? Created with Quink and bleach – enough said. ‘I am the Law’ – Human League 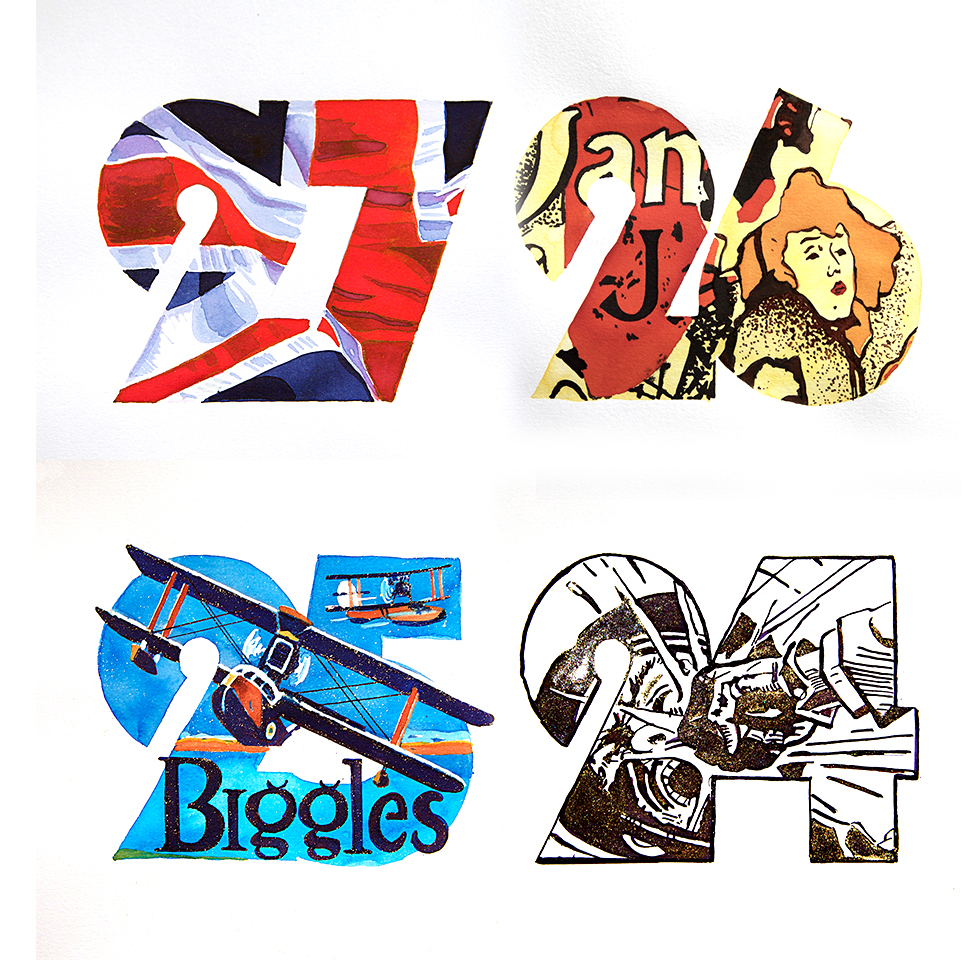 27. Jack – I just fancied doing this. It looks just like a watercolour and that’s just what I wanted. Using my own four CMYK fountain pen inks I mixed the the colours and applied with a rigger brush and dip pen using a zebra G flex nib which I have used in all the examples.

26. Jane Avril – Athena used to sell a large range of posters many of which ended up on my walls. The Toulouse-Lautrec classic of Jane Avril was one of them. I have always liked it. Even went to see his work at Albi. I used Diamine Sunshine Yellow, Amber and Sunset with Private Reserve Ebony for the line work. I was very pleased with this. The colours worked very well indeed.

25. Biggles – We have a massive second bookshop here in Rochester called Baggins. I often wander about looking in the Boys Own section. The vintage book covers are still a great source of happiness for me. They’re not exceptionally crafted, but there’s something about them. They were created quickly and all by hand, including the type. They’re fun! Using my own four CMYK fountain pen inks I mixed the the colours and applied with a rigger brush and dip pen using a zebra G flex nib which I have used in all the examples.

24. It’s for your own good! – Commando was another comic that I admit to reading. Some great drawing skills but in hindsight, the storylines… This was put together with Diamine Onyx and Schmincke gold dust. Works well within the type.

So what have I learned? Fountain pen inks are versatile and you can certainly use them for art. I’m having fun and next week I’ll describe some of my processes.

I’ll do my best to get the new Shimmer inks swatch tested and write up the next batch of Inktober art for next Sunday.

If you’d like to know more about this project, please take a look at the Mission Statement.

Begin typing your search above and press return to search. Press Esc to cancel.